VN retailers in the race
The market share of foreign retailers in Vietnam has clearly been expanding in recent years but domestic retailers have been looking at ways of stemming the flow.
Go Back 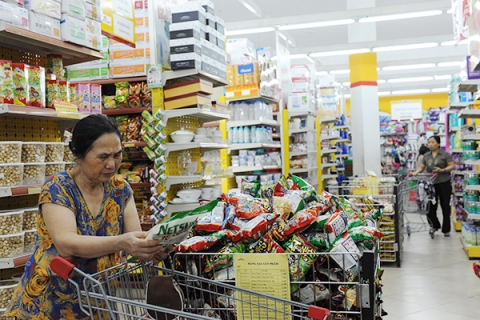 Ms. Vu Thi Hau, Deputy Director of the Nhat Nam Joint Stock Company, which has invested in Fivimart, said the supermarket chain cooperating with foreign partners is the right step to take as after selling stakes to foreign investors it can introduce more goods at its supermarkets.

“Under pressure from foreign retailers, improving our competitive capacity is the first thing we must do, by expanding business networks, focusing on major cities, and cooperating with foreign partners,” said Mr. Nguyen Ngoc Thang, Deputy General Director of Saigon Co-op.

It has come to cooperative agreements with partners to develop modern shopping malls, he added, and it hopes to promote Vietnamese goods among consumers.

Local retailers are giving due consideration to diversifying business models and retail forms, with Mr. Thang and Saigon Co-op planning to build a shopping center elsewhere in Southeast Asia within five years.

Speaking with VET on the sidelines of the Vietnam Retail Forum 2015 on December 9, Mr. Vaughan Ryan, Nielsen Vietnam Country Manager, said that he did not think domestic retailers were facing difficulties.

“The position of Saigon Co-op and Vinmart in the retail market is the evidence of this,” he said. “There is also strong growth in online retailing.”

In evaluating the development of foreign retailers in Vietnam, he pointed out that only BigC has seen dramatic development, while Metro, for example, seems to losing its market share and Aeon, as a new player, has a lot to do to win customer belief. It’s therefore too early to assess the competitive capacity of foreign retailers.

“Domestic retailers hold more advantages in competing with foreign retailers because the latter have higher operating costs and face difficulties in penetrating into the market despite having better management,” he said

The TPP is also a good opportunity for Vietnamese retailers to improve their competitive capacity.

Mr. Ryan said the scale of Vietnam’s retail market is still much smaller than the size of the country’s population so there is space for domestic retailers such as Saigon Co-op and Vinmart to grow.

To make the most of the opportunities, he said, domestic retailers must build modern retailing models and improve customer belief in the quality of their goods and services.

He doesn’t see shopping malls as being the way to gain market share. Convenience stores and small supermarkets are more still the more successful models.

Mr. Richard Leech, Executive Director of CBRE Vietnam, said that Vietnamese retailers quickly keep up with foreign retailers in the market. Domestic retailers need to enhance their competitive capacity to provide services of international standard and improve their management abilities and marketing strategies.

“Vietnamese retailers can totally satisfy international standards in retailing,” he added. “Some sectors are already controlled by domestic retailers, such as middle and high-class fashion.”