VN seafood exports to benefit from TPP
With nearly half of its seafood exports going to Trans-Pacific Partnership member nations, Vietnam expects the trade deal to further boost exports to these markets, according to the Vietnam Association of Seafood Exporters and Producers (Vasep).
Go Back 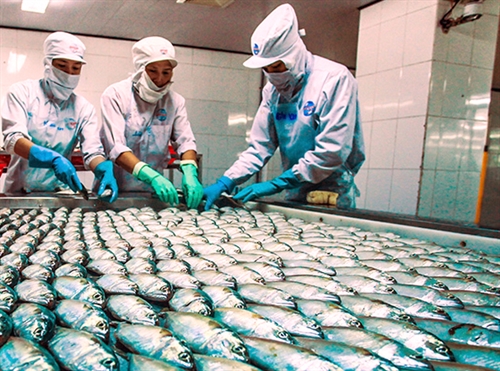 The US and Japan were the two largest importers, with a total value of more than US$2 billion last year, he said.

When the TPP takes effect, Vietnamese seafood exporters would benefit from the deal, which seeks to reduce or eliminate 90 per cent of import taxes, raising the country’s competitiveness vis-à-vis other exporting nations, he said.

For instance, Japan, the second largest buyer of Vietnamese tuna after the US, has for a long time imposed higher taxes on Vietnamese products than on those from other ASEAN member countries.

Argentina, Ecuador and India, the other main exporters to Japan, do not have a free trade agreement with that country, he said.

The TPP would make Vietnamese shrimp more competitive in the US than that from Argentina, Ecuador, India, Thailand, the Philippines or Indonesia, enabling Vietnam to significantly increase exports to the country, he said.

When the TPP comes into force, export tariffs would be slashed to zero per cent, creating an incentive for seafood firms to invest in their value chain from farming to processing and export, bringing them higher economic value, he said.

Vietnamese processors, who face a raw materials shortage, also expect to import them at cheaper rates once the TPP takes effect, he said.

But to enjoy the export tariff benefits, firms must meet the strict requirements related to origin of products, he said.

Besides, the seafood sector would face challenges as Vietnam integrates, including more trade barriers and anti-dumping and anti-subsidy lawsuits, he warned.

In the past decade the sector has developed to become one of the country’s key industries.

Vietnam ranked third globally in seafood production after China and India and fourth in seafood exports (after China, Norway and Thailand).

Seafood exports were worth $6.57 billion last year and are expected to top $7 billion this year, Hòe said.

Similar to the seafood industry which is facing challenges of product origin, the Vietnamese leather and footwear industry plans to produce more materials in an aim to increase the localisation rate of goods and satisfy origin standards included in Free Trade Agreements (FTAs) and the Trans-Pacific Partnership (TPP).

Speaking at the Vietnam Footwear Summit held in HCM City recently, Deputy Minister of Industry and Trade Hồ Thị Kim Thoa, said, “Under the leather and footwear industry’s master plan, by 2020 turnover of the industry would reach $23 billion and localisation proportion would increase from the current 50–55 per cent to 75–80 per cent.”

From this year, tariff level reductions will be carried out under FTAs, and by 2018, with Vietnam’s membership in TPP, import tax levels for leather and shoes will fall from 17–45 per cent to zero.

Under these new regulations, manufacturers have shifted their focus to products, technology and investment. At the same time, buyers are concerned about adjusting sourcing strategies.

“To take advantage of FTAs and the TPP, the local leather and footwear industry should prepare material at home to enjoy preferential tariffs from the deal when exporting their products to the US, the EU and other markets,” Deputy Minister Thoa said.

“The Ministry of Industry and Trade has released a decree about part supplying industry development, in which leather and shoe investors will receive many preferential policies,” Phạm Anh Tuấn, deputy head of the ministry’s Heavy Industry Department, said.

The weak supportive industry has caused the leather and shoe industry to deeply depend on imported material even more, and domestic enterprises have had no chance to join global supply chains due to low competitiveness.

“There are only a few enterprises with a closed production that can join supply chains of global brand names like Adidas and Nike. Most domestic shoe enterprises continue to process goods only,” Thoa added.

She also revealed that under the leather and footwear industry’s master plan, some industrial clusters would produce material.

Most global shoe brands have invested in Vietnam because of the young and skilled labour force. In the coming times, the country will continue to create the most favourable conditions for foreign investors.

“Enterprises should notice that when tariffs are cut, the origin standard is necessary to compete. They should also invest more to increase productivity,” Thoa added.