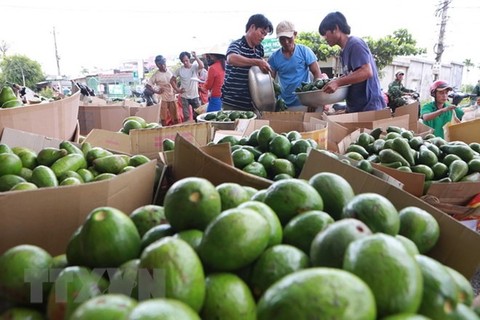 Cuong expected the PM’s team to study and propose policies to reduce the proportion of labour in agriculture, attract investments in infrastructure, especially in the irrigation system, develop markets and improve land policies.

According to Nguyen Dinh Cung, director of the Central Institute for Economic Management, restructuring the agricultural sector was a hard job because it was difficult to determine the dominance in the global value chain.

He, however, believed Viet Nam could be successful in the effort.

Truong Dinh Tuyen, former Minister of Commerce (now the Ministry of Industry and Trade) said Viet Nam should develop the food and food-processing industry but be selective as many fresh products could be sold for high prices.

In addition to this, developing standards and promoting their application in production as well as enhancing quality control to improve product quality were critical to boost exports with high-added value.

Economic expert Tran Du Lich stressed the importance of enhancing the link between farmers and enterprises to develop the agricultural production chain.

The project of restructuring the agricultural sector to enhance added value and sustainable development was approved in June 2013. After four years, the per capita income of farmers rose from VND18.6 million (US$830) in 2012 to VND29.2 million in 2016, according to statistics of the agriculture ministry.

Deputy Minister of Agriculture and Rural Development Tran Thanh Nam said trade promotion should be enhanced to boost the export of agro-forestry-fishery products to fulfil the target of $40 billion this year.

Expanding the export markets must be in line with developing the value chain and brand of major export products with significant potential, such as shrimp and fruits, Nam said.

Focus should be placed on removing technical barriers in the American and European markets, while expanding niche and new markets such as India and the Middle East.

According to the ministry’s steering committee for developing markets for agricultural products, boosting the export of agro-forestry-fishery products to China had huge potential due to its high demand, especially vegetables, fruits, seafood and milk products.

The ministry considered this a good opportunity for Viet Nam to promote exports to the Chinese market. But given China’s requirements for product quality and tightening of border trade, it would be challenging for Viet Nam’s export products.

The ministry predicts the demand of the European Union to increase in 2018, thanks to the economic recoveries of several member countries. Thus, the export of major products such as coffee, cashew and rubber to the EU would maintain good growth this year.

Export of seafood products to the EU was anticipated to face difficulty due to “yellow card” warnings over the failure to demonstrate sufficient progress in the fight against illegal, unreported and unregulated fishing practice.

The enforcement of Farm Bill on tra fish and Lacey Act on wood and wood products will pose challenges to exports to the United States this year. However, the export of cashew, coffee, rubber, vegetables and fruits to the US look promising.

In the ASEAN market, Viet Nam will promote the export of husbandry products to Laos, Cambodia and Myanmar.

Exports to Japan and China are predicted to be positive this year.

Regarding forestry products, Nguyen Quoc Tri, director of Viet Nam Administration of Forestry, said the signing of Voluntary Partnership Agreement on Forest Law Enforcement, Governance and Trade with the EU would be accelerated to boost the export of wood products to these markets.

The agriculture ministry’s statistics showed that Viet Nam earned $3.09 billion from exporting agro-forestry-fishery products in January, a rise of 25.9% over the same month last year.

Agro-forestry-fishery exports hit $33 billion in 2017, representing a rise of 13.8 per cent against the previous year.