VN shoemakers too reliant on imports
The Ministry of Trade and Industry (MoIT) is urging local footwear makers to further invest in support industries instead of depending excessively on imported raw materials and losing out on profits and competitiveness.
Go Back 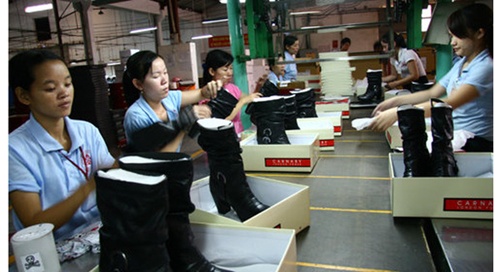 The Ministry of Trade and Industry (MoIT) is urging local footwear makers to further invest in support industries instead of depending excessively on imported raw materials and losing out on profits and competitiveness.

MoIT’s data shows that the country’s export revenue from leather and footwear products in the first six months of 2016 reached nearly US$6.3 billion, an increase of 8.8 per cent over last year.

This figure is expected to grow once several free trade agreements (FTAs) come into effect, substantiallly reducing or phasing out import taxes.

Under the agreements, the current tariff of 17–45 per cent will drop to zero per cent by 2018, helping footwear companies to boost exports.

In 2015, the United States spent nearly $4.1 billion on Viet Nam’s leather and footwear products, up nearly 50 per cent and equal to 33.9 per cent of the sector’s total exports.

The US has surpassed the EU to become the largest importer of Vietnamese footwear in the world. The EVFTA is forecast to boost exports by 50 per cent in 2020 and 93 per cent in 2025.

FTAs will help develop the support industry since foreign investors will invest in manufacturing materials to enjoy preferential origin.

As a result, Viet Nam can improve the supply of raw materials and increase its localisation ratio.

Many businesses have invested in developing raw material factories, he said, but the leather and footwear companies are still small and lack equipment and product designers.

In addition, increased raw material costs, wages, electricity and water rates pose additional difficulties for the industry, given that Vietnamese footwear makers have to compete with producers from Cambodia and Indonesia.

To deal with these difficulties, the Government should offer preferential tax policies, develop a centralised industrial zone and implement the master plan for the leather and footwear industry adopted by the MoIT, says Nguyen Duc Thuan, LEFASO chairman.