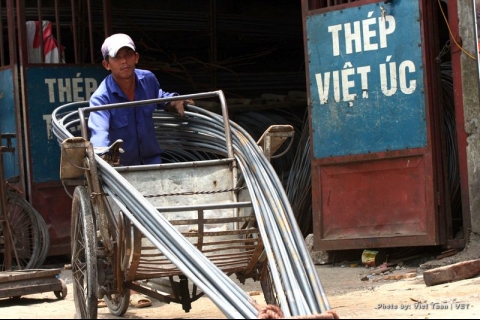 Mr. Nguyen Van Sua, Vice Chairman of the Vietnam Steel Association, said that the amount of steel imports has surged considerably this year, with Chinese galvanized steel being imported in large quantities at lower prices.

“In the first nine months of 2015 steel sheet manufacturers sold only 2.27 million tonnes while the volume of imports consumed in the domestic market was 1.08 million tones,” he added: “The amount of imported steel accounted for 32.2 per cent of the home market. This has inflicted major damage on domestic galvanized steel manufacturers.”

Mr. Sua said that commercial fraud comes in the form of fake labeling, unlawfully using the trademarks of prestigious steel manufacturers on counterfeit or shoddy goods, incorrect thicknesses of steel sheet and coating, and the absence of invoices when sales are made.

A report from the Ministry of Industry and Trade on preventing commercial fraud and counterfeit steel, released on October 22, stated that in recent times the sale of steel with weight and size below State-specified standards has been rife. “The main trick used in commercial fraud by steel vendors is selling the wrong type of steel despite what the buyer may request,” the report said.

Small production bases have used cunning in reducing the diameter by around 1 mm, the report emphasized. “With steel bars, reducing the diameter is done by producing steel tube below standard specifications (often called “thin” steel, as its thickness does not meet steel pipe dimensions), while the ridges on the steel body are raised to compensate for the reduction,” according to the report. “Such steel is similar in appearance as standard steel, but with smaller diameter, by 0.5 to 0.8 mm.”

Genuine enterprises have suffered a loss of prestige due to commercial fraud and counterfeit steel. “This has led to reduced market share and created cut-throat competition,” Mr. Sua said. He added that other consequences include losses to the State budget, waste from purchasing low-quality products, and the endangerment of people from low quality constructions.

Steel sheet has a major impact on the socioeconomy as well as on manufacturing and business activities. Yet inspections have received scant attention and inter-departmental coordination between police, customs, and market surveillance agencies continues to be limited. “Although there are many management agencies over steel, no agency shoulders direct responsibility for controlling quality,” he stressed. “Steel associations, enterprises, and manufacturers have not coordinated properly with functional departments in preventing violations.”

In order to surmount the difficulties presented by commercial fraud and counterfeit and low quality goods, a number of solutions have been proposed for government agencies and enterprises.

The government should improve legal documents to effectively manage steel sheet quality, such as designing technical regulations for galvanized steel sheet and color coating. At the same time government agencies need to consistently implement measures to control the quality of domestic raw steel and imported steel.

Enterprises should enhance their vigilance and protect their brands. They also need to boost production, upgrade their equipment and infrastructure, invest in technology, and have strong brand positioning to improve their competitiveness at home and abroad.

In order to prevent and handle commercial fraud in steel sheet, the Ministry of Industry and Trade has directed Market Surveillance Agencies in cities and provinces to cooperate with enterprises and related agencies to adopt measures and detect counterfeit and poor quality steel in the market. This will create healthy competition and prevent illegal iron-ore exports across the border, with severe sanctions imposed on the manufacture, sale, shipping, or storage of counterfeits, violations of intellectual property rights, and the sale of smuggled goods.