VN textile, garment firms lose competiveness
Vietnamese garment and textile enterprises are losing their competitiveness due to high costs of logistics services for exports, experts have said.
Go Back 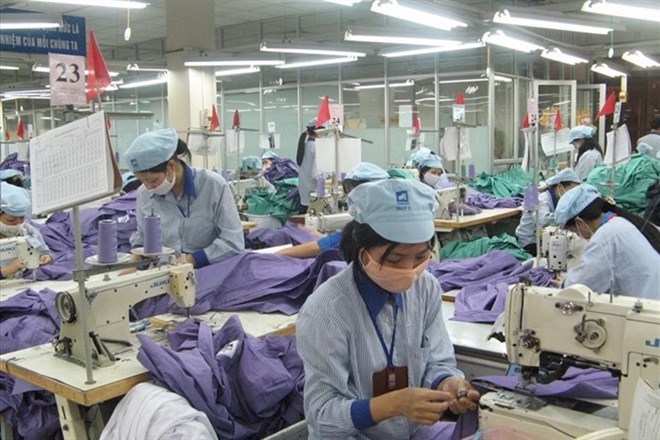 Vietnamese garment and textile enterprises are losing their competiveness in exports due to the high costs of logistics services.

According to statistics from the Vietnam Textile and Apparel Association (VITAS), textile and garment export value last year reached 31 billion USD, an increase of 19.2 percent compared to 2016.

Of the 31 billion USD in export value, the industry spent nearly 18 billion USD to import raw materials, including cloth, fibre and cotton, among others.

However, the cost of logistics activities for textile and garment enterprises accounted for 9.1 percent of total export turnover, around 2.79 billion USD.

According to VITAS, the cost of logistics services in Vietnam is much higher than that of neighbouring countries and the region.

Despite reasonable labour costs, competitiveness has been affected by transport costs, surcharges at seaports, and limited seaport infrastructure.

“The current regulations on fees and charges for logistics services are high, making transport costs also relatively high, accounting for between 30 and 40 percent of the cost of the products, compared to some 15 percent in other countries,” she said.

For example, BOT charges on the Hanoi-Hai Phong expressway for businesses from Hanoi and Bac Ninh are about 75 USD per trip, accounting for 40-42 percent of the total trucking fee, while in Malaysia, the BOT fees account for only 6 percent of trucking costs.

In addition, the surcharges of shipping lines also contribute to the cost of logistics operations in the country.

Experts said the expanded costs for logistics have significantly affected the garment and textile industry, which employs a large number of labourers and is hugely dependent on input importation, which results in low added value.

Nguyen Xuan Duong, Chairman of the Board of Directors of the Hung Yen Garment and Textile JSC, said it was difficult for enterprises to be highly competitive because of the high cost of logistics.

“The company has to spend around 5 million USD on logistics services for exports every year,” he said.

In the first eight months of the year, exports of the garment and textile sector reached nearly 20 billion USD.

This year, the garment and textile industry has set a target of 34-35 billion USD worth of exports. If achieved, the costs for logistics services would reach up to 3 billion USD, reducing competitiveness of businesses.

To address the challenges, many firms have applied technology to better manage warehousing as well as optimise supply chains.

One of the most commonly used technologies includes backing up bills and contracts, and automatically transferring documents between firms.

Experts said that logistics enterprises should work to improve their competitiveness, and consider cooperating in transport services to reduce costs for other enterprises.

They also suggested that the Government outline a roadmap to improve the quality of logistics services to meet the demand of many sectors, especially the garment and textile industry.

According to the Vietnam Logistics Business Association, Vietnam’s logistics costs in 2016 totalled 41.26 billion USD, equivalent to 20.8 percent of the country’s GDP.

Despite high logistics costs, the logistics sector has contributed a mere 3 percent to GDP, according to the association.

According to the World Bank, in 2016, the country’s logistics sector ranked 64 out of 160 countries, and fourth in the ASEAN region after Singapore, Thailand and Malaysia.