VN & the golden opportunity to become the world's workshop
The process of moving capital, existing potential and the pressure of reforms are identified as favorable conditions for Vietnam to become the world’s new factory.
Go Back 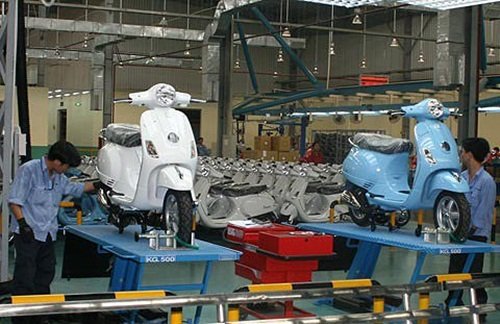 The race to become the new workshop of the world was the key topic of an international workshop held last week in Hanoi.

The chief economist of the ANZ Bank in Asia-Pacific Glenn Maguire said that capital flows are changing as foreign direct investment (FDI) is being withdrawn from China, as this country is shifting from manufacturing to services and consumption.

The economies that are open to FDI are likely to win the race. Vietnam, as a member of many major free trade areas in the world, with large area, diverse population, cheap labor and in the center of the three big Asian countries (China, India, Indonesia), offers major advantages.

“I believe that Vietnam will become a major economy in ASEAN and become the new workshop of the world in the next 15-20 years,” Maguire said.

Deputy Governor of the State Bank of Vietnam Nguyen Kim Anh said that Vietnam has favorable conditions to become the new manufacturing center of the world during period.

He clarified the favorable conditions as follows:

– The wave of investment shifting from China to Vietnam and Southeast Asian countries; Vietnam has participated in many international economic institutions and bilateral trade agreements, which will open up great opportunities for economic development and more exports.

– Multinational corporations will choose Vietnam to invest in. A population of over 90 million, of which 40% of workers under 25 years old, and low labor cost are an advantage of Vietnam.

– The final factor is the State’s determination in developing the manufacturing and processing industries.

Deputy Minister of Industry and Trade Cao Quoc Hung said it is difficult to say Vietnam will be definitely the new manufacturing center of the world at this moment, but Vietnam has many advantages, such as having abundant material resources, young labor force, social and political stability and is located in the region of dynamic development with high growth rates.

“The completion of TPP negotiations, a market accounting for 40% of global GDP, will create favorable conditions to expand markets and attract investment, including manufacturing and processing industries,” Hung said.

Chairman of the Vietnam Fatherland Front Central Committee Nguyen Thien Nhan said that it is also his own dream that Vietnam would become the processing and manufacturing center of the world.

Ms. Victoria Kwakwa, Director of the World Bank in Vietnam, said if the manufacturing processing industry develops, the economy will benefit most because this industry ranks third in job creation. In the past decade this sector attracted $90 billion in FDI, roughly 50% of the country’s GDP and accounted for 90% of export revenue.

“Many experts believe that Vietnam has the potential to become a destination for multinational corporations in the wave of shifting of processing and manufacturing centers. The correct identification of the trend, proper appreciation of the ability and resources, and recommendation of solutions are urgent,” said the State Bank Governor Nguyen Van Binh.

Vietnam needs to acknowledge the intrinsic challenges to develop a solution to become a global workshop. According to Vice Minister Cao Quoc Hung, Vietnam’s manufacturing and processing industry still has limitations, such as poor labor quality, lack of strong corporations to lead the domestic manufacturing industry and lack of branded manufacturing products that can penetrate the regional market.

“Vietnam has great potential and strengths to become a world manufacturing center in the future. However, to turn the wish into reality, Vietnam needs special decisions,” said Deputy Minister Hung.

In the short term, the Ministry of Industry and Trade proposed developing supporting industries, and taking advantage of opportunities from the free trade agreements to attract investment in the processing, and manufacturing industry, especially heavy industry.

In the long term, when the supporting industries have developed, Vietnam will have to attract investments in large manufacturing projects to gradually penetrate the overseas market.

In addition, the monetary policy to support this sector is critically important, said deputy governor of the State Bank of Vietnam Nguyen Kim Anh.

What should Vietnam do to become the world’s workshop?

Before making detailed preparation to turn Vietnam into a new manufacturing and processing center of the world after 2015, learning successful models from other countries is necessary, according to experts.

The fourth factor is the multilayer technology which allowed China to produce goods with different quality, corresponding to the price. And the last is China’s huge population and market, which enables its enterprises to “rehearse” before launching goods to the world market.

Tran Bac Ha, Chairman of the Bank for Investment and Development of Vietnam, said China well advantage of the cost and human resources while Germany was successful thanks to correctly identifying the central market, building brands for its goods, and having a reasonable wage policy and a policy to support small and medium enterprises (SMEs). For Mexico, success comes from taking advantage of its strong industries.

China is known as the world’s major factory. Germany is the leading country in the manufacture of machinery and automobiles.

Experts said that Vietnam has the opportunity to become the world’s new processing and manufacturing center after 2015 thanks to its advantages of geographical location and human resources. However, the challenges are many.

Mr. Duong Dinh Giam said that challenges come from many factors, including the quality of human resources. “Less than 20% of the 60 million people of working age are trained. In industry, labor quality is higher but only 20% of the workers are of the intermediate level or above,” Giam said.

To become the new processing center of the world, Chairman of the Vietnam Fatherland Front Nguyen Thien Nhan said the coordination between the government, enterprises, and business associations is needed, plus a detailed plan.

The nine prerequisites to become the world’s factory:

– The financial market is strong enough