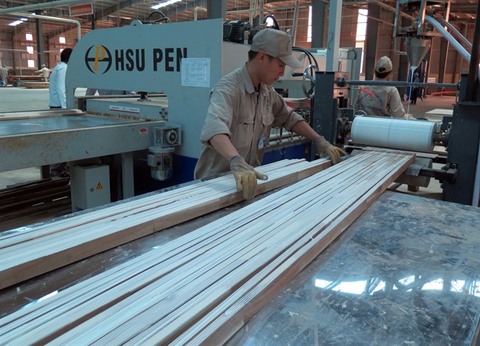 Nguyen Ton Quyen, vice president and general secretary of the Vietnam Timber and Forest Product Association (VIFORES), expected a mixed bag of fortunes in the domestic wood sector this year, with a handful of new trade agreements set to take effect.

Quyen said that he was certain exports of wood products from Viet Nam will increase significantly, even for a country that is already the world’s third largest and ASEAN’s biggest wooden furniture exporter.

He cited the Viet Nam-EU FTA and the Partnership for Comprehensive Poverty and Transnational Progress (CPTPP) as major boosts for wood exports, opening up access to a total of 28 markets across the world.

But such hope will be in vain without the necessary policies and guidelines to facilitate processing enterprises in the face of high global standards, changing technology and a shifting labor source, he added.

Worse still, while exports are to rise, the Vietnamese wood industry faces a seemingly insolvable problem of increasing the quantity of raw materials to meet producers’ demand for legally obtained timber.

Quyen showed particular concern for an imminent fierce competition to obtain materials, especially from the Chinese market, whose wood processing industry is expected to demand about 60 million cubic metres of raw timber this year alone.

He explained that Chinese enterprises will scour neighbouring markets to procure this massive amount of materials, thus putting Viet Nam and other Southeast Asian countries under competitive pressure.

Meanwhile, neighbouring countries such as Laos, Cambodia or Myanmar will continue to ban the export of logs and sawn timber directly from plantations, further reducing supply.

Nguyen Quoc Tri, director general of the Ministry of Agriculture and Rural Department’s (MARD) Vietnam Administration of Forestry (VAF), was certain that the country’s wood products export turnover will reach US$9 billion or more in 2018.

Tri said that although Viet Nam has closed its natural forests for more than a year, the wood processing industry is still developing well, proving that they can do just fine without consuming natural wood.

But in order for that to happen, the country still needs about 34 million cubic metres worth of raw material, he said.

Nonetheless, the VAF has set a target of 201,000 hectares of new forests and to regenerate 360,000 hectares with an additional 50 million trees to be planted, in order to supply up to 18 million cubic metres of raw timer in 2018.

He worried that without proper sustainable forest management, improved productivity, quality and distribution, there will not be enough wood to meet domestic demand.

Huynh Van Hanh, vice president of Handicraft and Wooden Processing Association of Ho Chi Minh City (HAWA), told the GDVC that besides the 5 million hectares of recently planted forest, about 1 million hectares are being planted every year, capable of supplying up to 3 million cubic metres of timber per year.

Imports of wood materials amounted to just over $2.1 billion in 2017. Thus, most of the materials used for wood processing over time are taken from sources within the country. Hanh said that raw wood imports are meant to enrich the market, creating more choices for consumers and to gradually replace the habit of using precious wood, not to replace domestically harvested wood.

Ha Cong Tuan, deputy minister of agriculture and rural development, suggested extending the life cycle of timber forests as a method to improving the added value and quality of raw wood materials.

The deputy minister said on the Government’s online portal that he counted on the support of foreign partners for Vietnamese enterprises to raise wood export turnover in 2018.