VN’s auto industry at crossroads: report
Viet Nam’s automobile industry is at cross roads, lagging behind ASEAN competitors, according to a report launched by the International Finance Corporation (IFC) and the Ministry of Planning and Investment (MPI) early this week.
Go Back 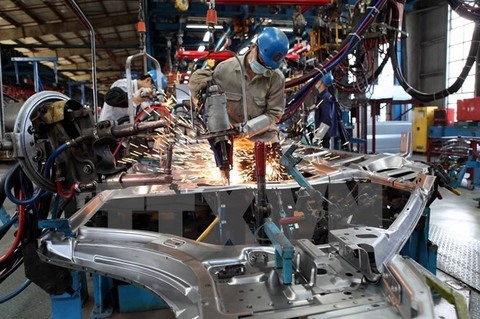 January-June sales of automobiles are down due to the Government’s Decree 116, which stipulates the conditions for production, assembly, import and business of automobile warranty and maintenance services.

With the tariffs on vehicles imported from other ASEAN countries eliminated to zero per cent from January 1, 2018, the report said that there was a risk that Original Equipment Manufacturers (OEMs) will shift production to other countries.

“This dynamic makes it all the more urgent that a ‘leap-frog’ strategy be adopted by launching a highly persuasive proactive campaign to motivate OEMs to establish or expand their operations in Viet Nam,” said the report.

“In parallel, it’s also important for Viet Nam to reach out to the global top 100 Tier One automotive component suppliers,” it said.

To reach the target, the report recommended that Viet Nam synchronise investor targeting with the inter-governmental taskforce, co-ordinated by the Ministry of Industry and Trade and supported by the Japan International Cooperation Agency.

The focus should be on the development and production of electric vehicles and the “next generation” of lithium-ion batteries. Three of the world’s leading car battery manufacturers (Samsung, LG and Panasonic) already have a significant manufacturing presence in Viet Nam, which could give the country a head start.

It’s necessary to develop and substantiate the marketing message that Viet Nam is optimally placed to become an alternative to China for manufacturing electrical vehicles and components. In line with that argument, the country should seek incremental investment from the US (General Motors) and German (Volkswagen, BMW and Mercedes) investors already in China.

“Through development of the priority sector value propositions, honing investor targeting and mastering the techniques to position Viet Nam as ASEAN’s most competitive location to invest in and source from, a cohesive approach will help ensure FDI and spillover benefits from FDI will increasingly meet expectations,” said the report.

Sales of automobiles down

The Vietnam Automobile Manufacturers’ Association (VAMA) reported that its members sold 125,659 units of various types in the first half of this year, down 6 per cent compared with the same period last year.

VAMA said that there was a large difference in consumption between the numbers of domestically assembled vehicles and imported units. As many as 106,678 locally-assembled units were sold, up 10 per cent, while only 19,039 imported were sold, down 49 per cent year on year.

The total sales of VAMA member brands fell sharply. The Lexus brand (Toyota) fell 83 per cent. It was followed by Ford, down 33 per cent, Nissan down 26 per cent, Toyota and Mercedes-Benz all down 13 per cent and Chevrolet brand (GM Vietnam) down 9 per cent.

Insiders said that the January-June sales were affected by the Government’s Decree 116/2017/ND-CP, known as Decree 116, which stipulates the conditions for production, assembly, import and business of automobile warranty and maintenance services and came into effect early this year.

In 2017, the two big Vietnamese automakers, Toyota with the Fortuner model and Ford with Ranger model, always reached high sales volume and consistently ranked among the bestselling car brands on the market every month. The demand for those models is still high, but there are no vehicles for sale due to the provisions of the decree 116.

The market in the first six months showed that Honda Vietnam imported four models (including the CR-V, Civic, Jazz and Accord) and then GM Vietnam imported two models Chevrolet Trailblazer and Colorado for distribution in the country.

Toyota Vietnam recently announced the sale prices of three imported units including Fortuner, Hilux and Hiace, but these models will be officially rolled out to the market in August because of the lengthy time required to complete relevant procedures.

Other automakers such as Ford, Nissan, and Mitsubishi also said that they are trying to complete the procedures required by the Decree 116 in order to bring vehicles back the market in the shortest time. It’s expected to enter the market by the end of the third quarter of the fourth quarter this year.

The supply of cars from the beginning of the year to now and from now until the end of the year is still mostly locally-manufactured vehicles. Firms leading the market include Hyundai Thanh Cong, GM Vietnam and Truong Hai Automobile JSC (Thaco) with brands such as Mazda, Kia and Peugeo.