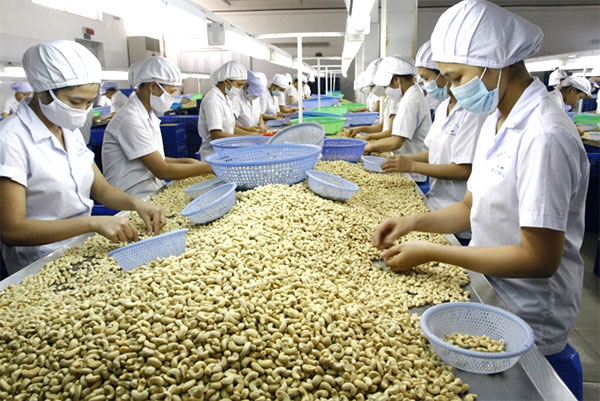 Viet Nam has been the world’s largest cashew nut exporter for many years, with exports reaching US$2.5 billion last year.

This year the US has surpassed China to become the largest buyer of Vietnamese cashew as exports topped $1 billion in the first five months, Nguyen Duc Thanh, Vinacas chairman, told a seminar in HCM City on Monday organised by Vinacas and Thanh Nien newspaper.

Dang Hoang Giang, Vinacas deputy chairman and general secretary, said Viet Nam accounted for more than 50 per cent of the cashews reaching the US market, exporting over 28,500 tonnes worth more than $220 million in the first four months, up 8.8 per cent in volume and 18.6 per cent in value year-on-year.

To further promote exports to the US, Vinacas will send a business delegation at the end of this month to attend the World Nut and Dried Fruit Congress in San Diego.

There are virtually no obstacles in exporting to the US and currently zero tariffs, Giang said.

Thus while the Trans Pacific Partnership would have no bearing on the rate, “We think [it] will bring more intangible value for the Viet Nam cashew industry in terms of brand and value … In particular, US consumers and businesses will know more about Vietnamese cashew nuts.”

Vu Thai Son, general director of Long Son Joint Stock Company, said an increase in cashew output in Viet Nam and Cambodia coupled with strong improvement in processing machines and a diligent workforce would enable the industry to develop in the next two to three years.

But profit margins would fall due to fierce competition, he said.

Son said with the price of raw cashew rising sharply since last year, many sellers in Africa reneged on their contracts, demanded prices should be increased by $100-150 per tonne or delivered poor quality cashew, causing difficulties for Vietnamese businesses, who are in turn competing with each other and offering higher and higher prices.

Delegates suggested that businesses should report African defaulters to the association to boycott them.

Vietnamese businesses should co-operate to avoid problems with imports, they added.