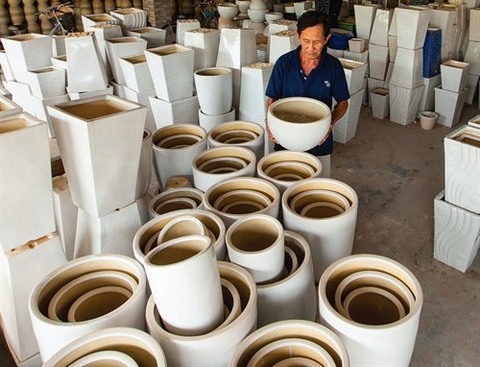 A ceramic plant in Binh Duong Province. Ceramic firms have stepped up investment to bolster their competitiveness in the domestic and export markets.

According to the Binh Duong Ceramics Association, the province has nearly 300 ceramic production facilities supplying 130-150 million pieces of products of all kinds to the market each year.

Binh Duong is one of the provinces with a developed ceramic industry, and it earns some US$150 million from exports and $70 million from domestic sales annually.

Ceramic are among the province’s main export products with high value addition.

Many producers there are investing in new technologies to improve productivity and quality and reduce costs to improve their competitiveness.

This requires producers to diversify their products, invest in technology to ensure quality and cut back costs, he said.

Diversifying products by mixing traditional Vietnamese or Asian features with western ones is the basic trend in many countries, he said.

Besides investing in factories and equipment, his company has also adopted advanced quality management systems to ensure the entire operation is always controlled and constantly improved, he said.

It has adopted the Japanese Kaizen quality control programme, he said.

It has collaborated with customers to set up a set of quality and social-environmental policies based on international standards to become an environmentally-friendly and sustainable producer, he said.

Exports were up 20 per cent last year to $10 million, he revealed.

The company has signed export contracts with partners in 50 countries and territories around the world, including fastidious markets such as the US and EU, he said.

For this year it has export orders that would last until nearly the end of the year, he said.

Many other famous ceramic firms in the province such as Phuoc Du Long and Minh Long I have orders until the middle of the year after export demand increased by 15-20 per cent and local demand by 20-30 per cent.