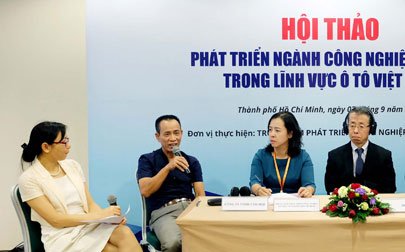 An expert speaks at a conference on development of supporting industries for the auto sector in HCMC on Wednesday – PHOTO: HUNG LE

Nguyen Thi Xuan Thuy of the Industrial Policy and Strategy Institute (IPSI) said all respondents in the institute’s recent survey said Vietnam should boost the development of the auto sector as it holds huge growth potential and can contribute much to the economy.

In developed countries, the auto industry accounts for 10% of gross domestic product (GDP), creates 10% of total jobs and generates 10% of export turnover, Thuy told a conference on development of supporting industries for the auto sector in HCMC on Wednesday. The event was held by the HCMC Department of Industry and Trade, and the Japan International Cooperation Agency (JICA).

In Vietnam, the auto industry creates about 80,000 jobs and contributes around US$1 billion to the State budget a year.

Professor Kobayashi Hideo of Japan’s Waseda University told the conference that in the 1950s Japan was advised not to develop the auto industry. However, reality showed that this industry has made great contribution to Japan’s economy.

Hideo said the localization rate in Vietnam’s motorcycle sector is very high. He suggested the Vietnamese Government create favorable conditions for local producers of motorbike parts to make components for the auto sector.

He said some domestic and foreign manufacturers have produced parts for the two sectors.

A Japanese business said at the conference that the situation in Japan in the 1950s were similar to Vietnam’s at present. He noted Vietnam has an opportunity to boost production of auto parts.

Thuy of IPSI said Vietnam’s parts imports and exports are almost equal, and that some domestic manufacturers have joined the global supply chain.

According to the IPSI survey, Vietnam is among the three biggest ASEAN markets with huge auto demand besides Indonesia and the Philippines. The domestic auto market has grown well over the past two years owing to a number of factors.

The golden population structure with young people making up the largest portion of the country’s total population will last until 2030, coupled with a sharp rise in the number of middle-class people and the average income per capita hike from US$2,111 in 2015 to US$3,000 by 2020. More spending has gone to transport infrastructure with many expressways under construction.

The free trade agreements (FTAs) which Vietnam has signed, especially the Trans-Pacific Partnership (TPP) trade pact, are expected to spur the growth of the local auto sector.

Japan has imported auto parts from China, South Korea and Thailand. Given the TPP trade agreement, Japanese producers, which look to sell completely built-up (CBU) autos to TPP member states, must shift to purchasing these items from member countries like Vietnam.

However, Vietnam’s supporting industries are still lagging behind those of other countries in the region. The production cost of autos in Vietnam is 23% higher than in Thailand and Indonesia.

Inconsistent policies for the industry, especially those relating to taxes and fees, are also to blame.

Local auto firms are coping mounting competition as the tariff on CBU autos imported from ASEAN nations will drop from 40% to 30% next year and 0% in the following year in accordance with the ASEAN Trade in Goods Agreement (ATIGA).