Home » Press » Where is the money?

Where is the money?
Banks’ liquidity is strong, government bonds have been selling well, and bank interest rates and the dong/dollar exchange rate remain stable. However, the growth rate of the economy has been slowing.
Go Back 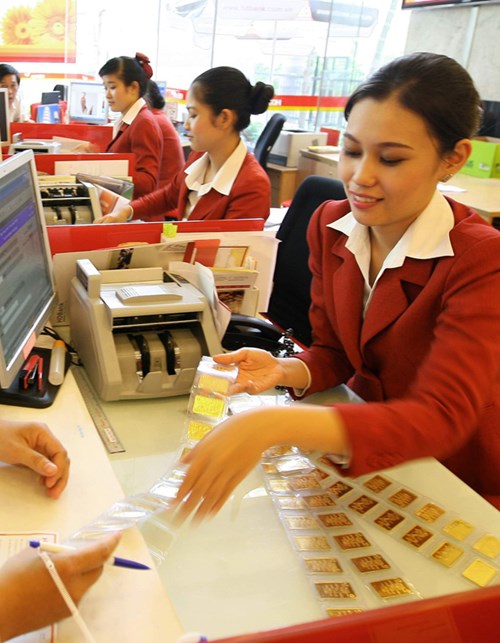 Ha has deposited dollars because he fears the dong may lose 2-3 percent at least in value. However, with the principle of ‘not putting all eggs into the same basket’, Ha has deposited Vietnam dong as well and expects to get VND5 million in interest every month from the deposit.

In early 2016, the gold price was VND32.5 million per tael, while it is now VND36.6 million per tael. This means that if someone bought gold earlier this year and sold days ago when the price hit the highest peak of VND39 million per tael, he would get profit of 13-15 percent per annum, double the dong deposit interest rate.

However, analysts commented that the gold market only caught the public’s attention in early July 2016, after the vote for Brexit. At that time, the gold price jumped to VND39 million per tael.

According to Nguyen Thanh Truc, deputy chair of the Gold Business Council, about VND2 trillion was poured into gold at that moment. But the gold market is weak now.

A report shows that real estate prices had increased by 2-3 percent by mid-June. According to the Vietnam Real Estate Association, there were 7,500 successful transactions by June, while the figure was 1,700 in HCMC.

According to the State Bank of Vietnam, dong deposits at banks had increased by 10 percent by July 20, 2016 compared with this time last year. The capital that banks had poured into the real estate market increased by 9 percent, accounting for 8.5 percent of total outstanding loans.

The exact figure has not been exposed by the central bank, but some financial institutions estimated that the figure was VND428 trillion.

According to Nguyen Tri Hieu, a banking expert, as the dollar price is stable and the dollar interest rate is zero percent, it would be more profitable to deposit dong at banks.