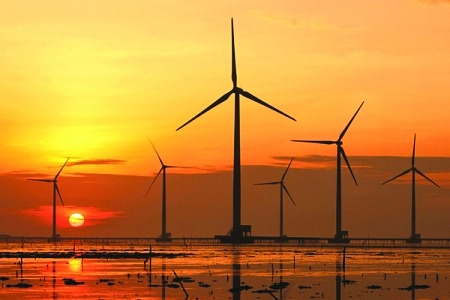 The Bac Lieu Wind Power Plant in Bac Lieu province, covering an area of 500 hectares, built with investment capital of VND5.2 trillion, is the largest wind power project in Vietnam.

It is expected that its 62 turbines with the total capacity of 99 MW, would provide 320 million kwh of electricity to the national grid.

Bac Lieu is one of the few projects in the field.

The World Bank’s map on wind power potential in South East Asia shows that the wind potential at the height of 65 meters in Vietnam are the biggest in the region, equivalent to the capacity of up to 513,360 MW.

Vietnam is situated in the monsoon area and has 3,000 kilometers long of the coastline which receives wind all year round.

Ninh Thuan, Binh Thuan in the central region, and Ben Tre, Tra Vinh, Soc Trang and Bac Lieu in the south receive natural wind which is favorable for the development of wind power.

Recently, the US General Electric (GE) and the Ministry of Industry and Trade signed a cooperation agreement on developing recycling energy in Vietnam, under which the two sides would develop at least 1,000 MW of power from new wind power farms until 2025.

However, only 10 percent of projects have been implemented.

The wind power farms in Tuy Phong and Phu Quy Island in Binh Thuan province, together with the one in Bac Lieu province, only have the capacity of 114 MW, or 0.3 percent of total electricity in 2015 (over 37,000 MW).

Investors are reluctant to invest in windpower because they can see that the electricity selling price is not high enough to cover the investment cost.

In Vietnam, the Electricity of Vietnam (EVN), the only wholesale buyer, pays 7.8 cent per kwh, or VND1,731 for wind power.

With the high investment rate of $2-2.5 million per MW and the 7.8 cent per kwh of electricity, the lowest in the world, investors do not find it attractive to develop wind power projects.

Analysts say it would take the investor of Bac Lieu about 20 years to recover the investment capital.