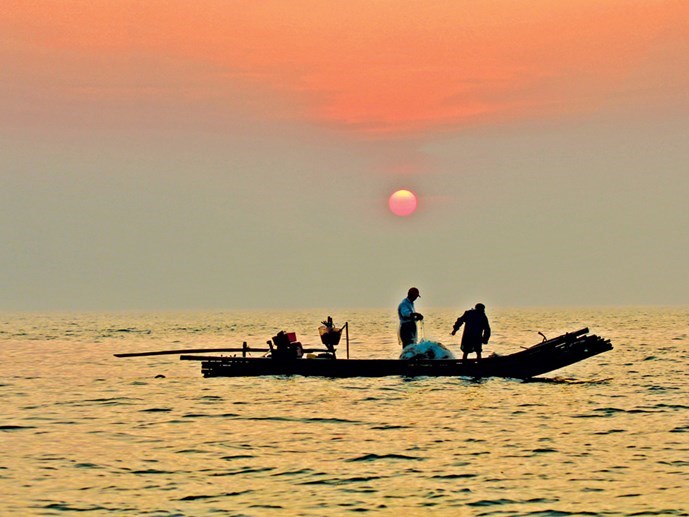 A couple of husband and wife in Thanh Hoa pull their nets at first light of day after sailing out at 3 a.m. Photo: Ngoc Minh

In the coastal Hoang Hoa District in the central province of Thanh Hoa, fishing is no longer a male preserve like it is in most places.

Hundreds of women, many of whom suffered from severe seasickness once, accompany their husbands out to sea to make their job easier and help them earn more money from each trip.

They quickly hit the water with other fishing couples. Some women are doing the job even at 60 years of age since there are few other options for making a living in the area.

The fishers use simple bamboo boats, and Huong’s is a raft six meters long and 1.5 meters wide. Some use coracles.

Though it is not safe to sail these vessels in rough waters, locals say they catch more fish than in calm waters.

They take around two hours to sail 12 nautical miles, then stop and cast their nets before sailing back for the fish.

Huong controls the raft and her husband reels in the nets.

One morning in late October, they caught some fish and shrimp which Huong estimated could be sold right at the beach for VND500,000 (US$22), leaving them with VND200,000 after fuel and fixing the nets.

“Many days we did not earn enough even for the oil,” she said.

They cast the nets again and while waiting for the fish, they had breakfast on sweet potatoes boiled the previous night.

Huong said their four children must have had a similar breakfast and gone to school.

The couple make two trips every day, one from early morning until 11 a.m. and the other from 1 p.m. until 7 p.m.

Their eldest son, aged 15, takes care of the housework and cooks for his siblings.

“My son has told me several times he will accompany his father out to sea. But we insisted that he had to study,” Huong said.

“That’s the only way he can avoid this hard life.”

A fishing couple aged around 60 in Thanh Hoa, where locals say there are few other ways to make a living. Photo: Ngoc Minh

Huong said until five years ago only the men went to fish, but at some point the women decided they had to help their husbands out.

“It will be very hard for our husbands to control the boat and haul in the nets at the same time.”

“My husband cannot relinquish control of the boat to get the fish out of the nets; he will have to sail back to shore to do that before sailing out to cast the nets again. It will cost both time and oil.”

Huong said most women get seasick, especially in rough waters, but they have become used to it.

She calculates the family’s expenses carefully as she still owes her neighbors money she borrowed to pay the school fees of VND15 million ($670) for her four children.

She and her husband took only one day off in October when the water was too rough.

Nguyen Thi Hong, a 30-year-old who grew up on paddy fields, said fishing is the only way people in the district can feed their children and send them to school.

Hong said she and many women used to be nauseous and vomit in the boats for a long time.

“It was a hard job, but when you suffer hardship long enough, you get used to it.”