Wooden furniture firms advised to optimise domestic materials
The world’s wooden interior décor market is predicted to grow at 3.5 per cent in 2018 and continue expanding, providing opportunities to Vietnamese businesses to increase exports of the products.
Go Back 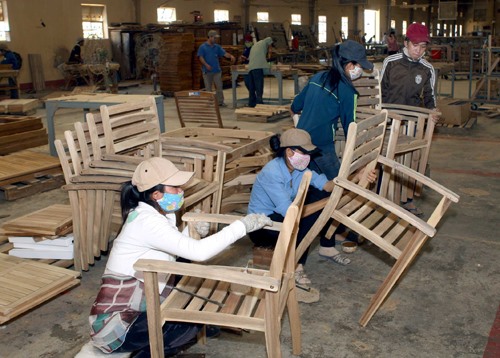 The main issue of the wood-processing enterprises in Việt Nam is that they are focusing on a market section with low added value, mostly concentrating on outsourcing to foreign clients. — VNA/VNS Photo Vũ Sinh

If Vietnamese businesses optimise the material sources they have and make the best use of trade promotion activities, their export earnings are expected to surpass US$8 billion.

According to Huỳnh Văn Hạnh, vice president of the Handicraft and Wood Industry Association (HAWA) of HCM City, in the past 15 years, the wood industry has maintained a growth rate of 8 to 15 per cent per year despite global economic fluctuation.

The main issue of the wood-processing enterprises in Việt Nam is that they are focusing on a market section with low added value, mostly concentrating on outsourcing to foreign clients.

To further develop the domestic wood sector, businesses should pay attention to selling abroad the whole space of high-end interior décor instead of doing outwork and selling separate products.

Meanwhile, the Việt Nam Timber and Forest Product Association asserted that it was necessary to make full use of domestic material sources to create a breakthrough for the sector.

Statistics show that Việt Nam has more than three million hectares of acacia, with an output of 150cu.m. of wood per hectare per year. By exploiting only half of the total area, Việt Nam will have 22.5 million cubic metres of wood per year, meeting the material demand of the whole sector for both domestic and foreign markets.

Moreover, acacia wood is much cheaper than imported wood, which will help facilitate a closed production chain for made-in-Việt Nam wooden products.

According to Hạnh, trade fairs and exhibitions are currently considered the most economic and effective means of promotion. Therefore, HAWA has informed its members of many events abroad in 2018. It will support them in joining these events to seek partners and broaden markets.

Hạnh said that exhibitions in the country had also drawn an increasing number of enterprises, especially small ones, which would help them know about the number of deals secured immediately.

He noted that the Việt Nam International Furniture and Home Accessories Fair 2018 attracted 4,528 firms, while the 2017 event gathered only 2,000. Transactions at the event also increased this year.

Besides traditional trade promotion, digital marketing is popular in many countries, such as the United States, Germany, Italy and China. But it is hard to find Vietnamese wooden décor firms on the internet as Vietnamese firms are yet to efficiently exploit the digital medium.