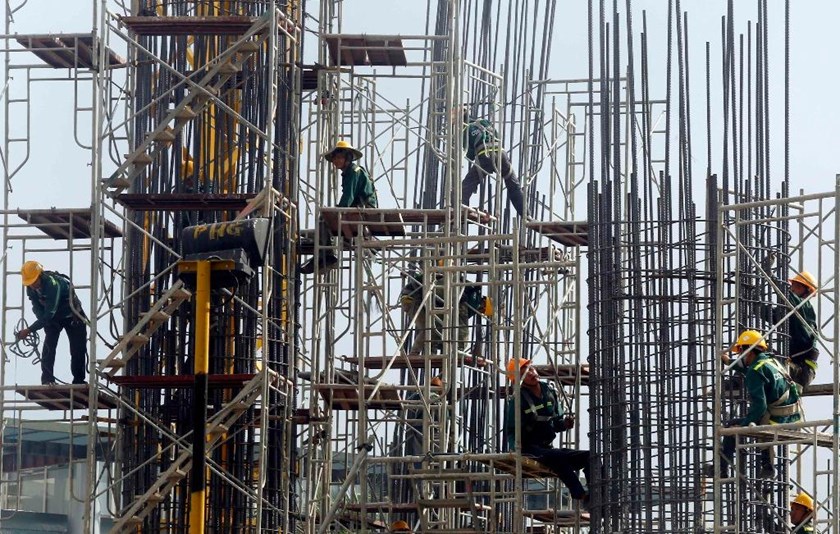 Workers arrange steel structures at a construction site of an office building in Hanoi. Photo: Reuters

The new estimate was up from a forecast of 6 percent in the Washington-based lender’s economic outlook report released in April.

In its October economic update on the developing East Asia and Pacific region, the institution also raised its growth forecast for Vietnam to 6.3 percent next year, from 6.2 percent previously, saying that the growth will be likely the same in 2017.

Strong performance in the export sector is another factor that makes Vietnam’s growth conditions the “most buoyant” among ASEAN economies, along with the Philippines, it said.

Vietnam’s export volumes have almost doubled since 2010, an outstanding growth among its peers, according to the report.

The World Bank warned that the country’s outlook, though positive, is subject to significant downside risks, both external and domestic.

As global growth remains sluggish with uncertain outlook, Vietnam will see implications through its significant trade linkages, while rural household income and consumption may be adversely affected by weak global prices of rice and other farm products, it said.

After a surplus of US$2.1 billion entire last year, Vietnam’s trade saw deficits of US$3.5 billion in the January-July period this year.

The country’s domestic downside risks come from its “persistent” fiscal imbalances which are a concern especially when considering its rising public debt, according to the report.

Compared to Thailand, where public debt remained moderate at 30.1 percent of GDP last year, Vietnam’s public debt-to-GDP ratio soared up to 59 percent in the same year from 47 percent in 2009, the report said, noting the rise was particularly strong in short-term domestic debt.

Although Vietnam’s public debt levels are still within the sustainability limits, its debt servicing costs are beginning to cut into fiscal space and risk crowding out more productive spending, it said.

The institution also pointed out mixed progress on structural reforms in Vietnam, especially those related to state-owned enterprises and banking sector, both deemed important in boosting the economy’s growth.

It said the equitization of state businesses has slowed down this year, while the mergers and acquisitions of commercial banks have accelerated.

However, the resolution of bad debts within the banking sector remains a concern.

The lender said the Vietnam Asset Management Company’s efforts continue to be hampered by the lack of financial sources, weak professional capacity and the absence of adequate enabling legal framework.

A credible medium-term fiscal consolidation plan together with comprehensive structural reforms to strengthen the finances of the state-owned enterprises and banking sector would remain crucial to ward off pressures on public debt and boost private sector confidence, the World Bank said.

Since it was founded in 2013, the asset management company has bought more than VND200 trillion ($8.9 billion) worth of bad debts, the company reported on Monday.